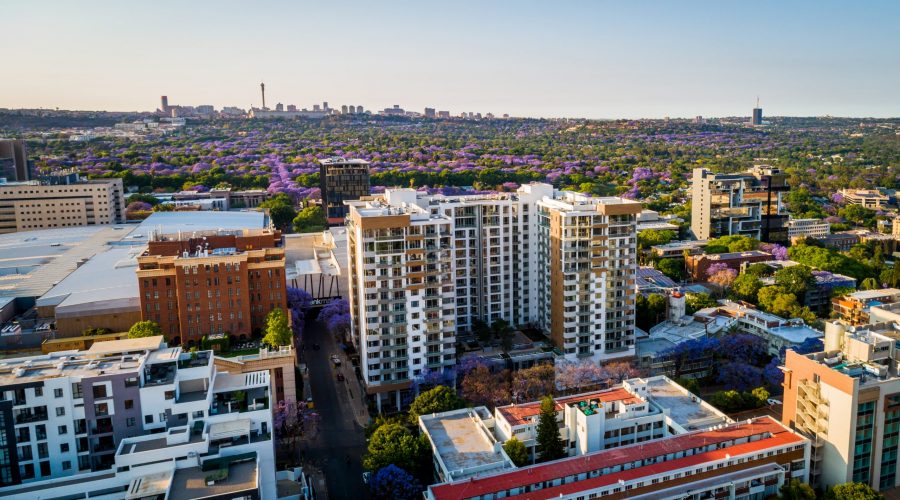 Rosebank is one of South Africa’s fastest growing business districts. A testament to Rosebank’s ever-growing popularity as a compact, diverse and walkable ‘live, work, play’ district, over the past two years a number of new commercial and residential buildings have launched in Rosebank.

Here’s a look at six of the newest buildings that are changing the Rosebank skyline.

This exciting mixed-use development in the heart of Rosebank’s shopping precinct is steadily nearing completion and is scheduled to open in March 2021. The building’s black facebrick facade with touches of greenery is certainly eye-catching with many locals on social media comparing it to a Manhatten apartment block.

The 12-storey, 4,300m2 development (which also has three floors of basement parking) will be home to the first voco™ hotel in Africa, by international hotel group IHG. There will also be co-working space by Workshop 17 (who also have premises in Rosebank’s The Firestation), as well as conferencing facilities, office space and on the ground floor, opening out onto the pedestrianised section of Tyrwhitt Avenue, restaurants and retail space. Meanwhile on the roof will be a garden with views over the city.

Like most new Rosebank buildings, The Bank strives for sustainable practices and will make use of renewable energy sources including solar power and a heat recovery system that re-uses generated heat for water for the hotel.

One of Redefine Properties’ latest luxury residential developments is Park Central in Rosebank with 159 high-end apartments, studios and penthouses. At 20-storeys this is now one of the tallest buildings in Rosebank and its distinctive facade includes several ‘sky gardens’ leading out of its most luxurious apartments.

Park Central offers its residents a range of high-end urban-living amenities including concierge services, a gym and a rooftop swimming pool and terrace. Also available to residents is an exclusive venue for private events which has its own gourmet kitchen.

Contributing to the principles of environmentally sustainable development in Rosebank, the facade has been designed to be energy efficient and the building offers LED lighting and a gas-heated centralised hot water system.

This distinctive new building on Oxford Road (opposite the Hyatt Hotel), offers 36,700m2 of office space over nine floors (with a further six levels of basement parking), and has been designed to meet the increasing demand for high-quality office space in Rosebank. The building is flanked by two extended office towers that are connected by a central atrium, consisting of 9 floors and 6 levels of basement parking.

Among the biggest tenants who will be moving into the now completed building in 2021 is mining giant Anglo American, who are relocating from the Johannesburg CBD.

Completed in 2020 The Tyrwhitt is now one of Rosebank’s biggest residential buildings with 219 units, ranging in size from 54m2 to 135m2 as well as 260m2 penthouse apartments on the top floors. The views over the surrounding suburbs from the north-facing balconies are quite simply spectacular. Ammenities at the 14-storey building include state-of-the-art security, a generator, fast fibre-optic internet and a 24-hour concierge service.

You could hardly live closer to Rosebank’s biggest attractions than at this new residential building that is steadily nearing completion (opening March 2021). Located right on the doorstep of The Zone@Rosebank, the Rosebank Gautrain station is a mere two-minute walk away. The Median offers 1, 2 and 3 bedroom apartments and penthouses, all of which come fitted with high-speed fibre, SMEG appliances and gas stoves. 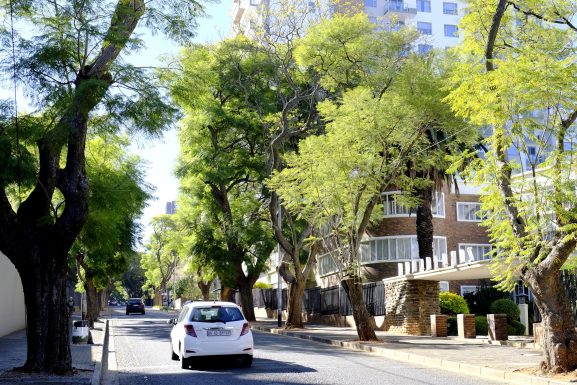